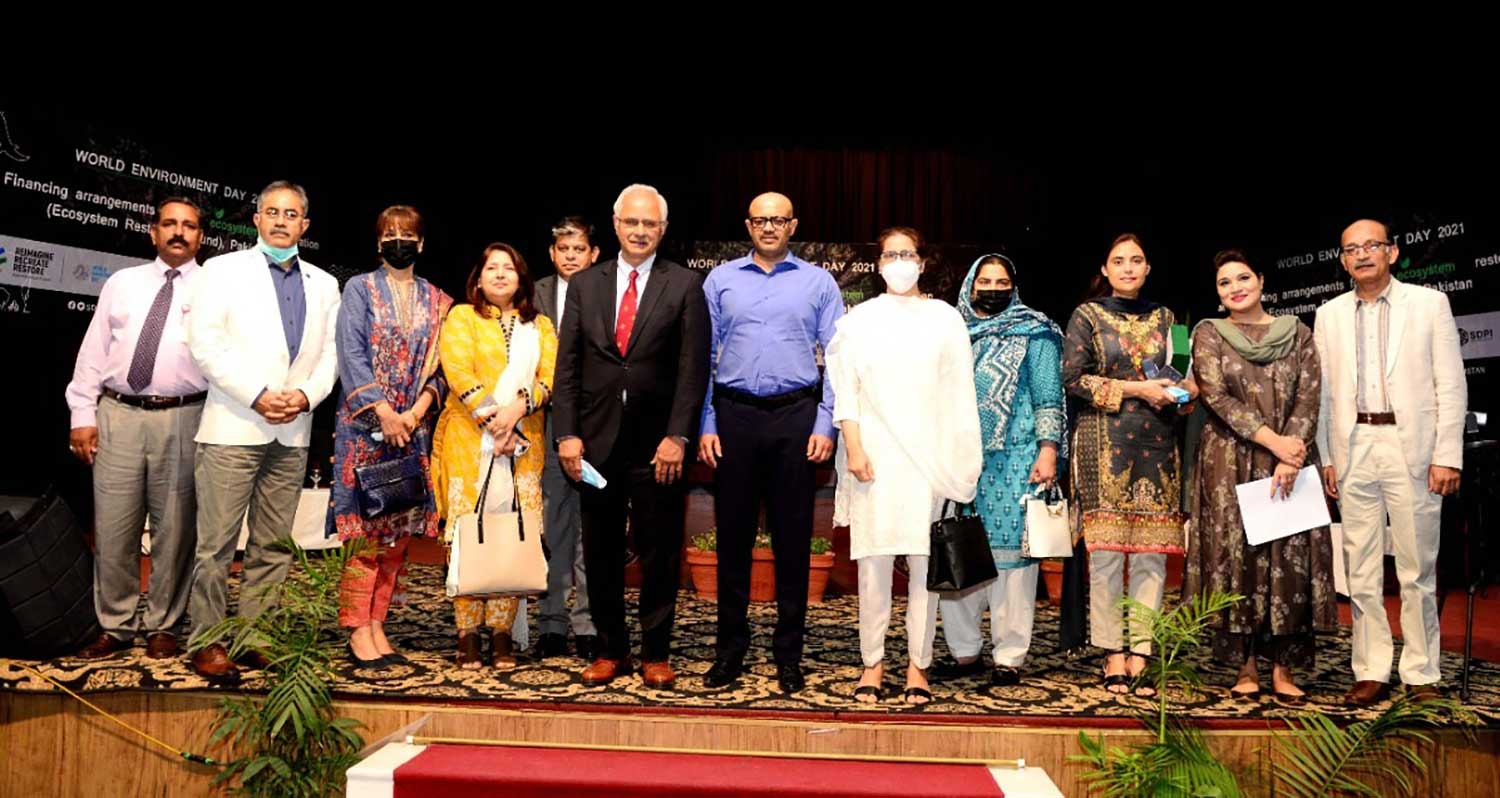 Experts discuss financing arrangements for ecosystem restoration in Pakistan
A seminar on 'Financing arrangements for ecosystem restoration in Pakistan' was held here at the GC University Lahore under the auspices of Sustainable Development Policy Institute (SDPI) in connection with the World Environment Day 2021.
Addressing the seminar via video link, Special Assistant to Prime Minister on Climate Change Mr. Malik Amin Aslam said that the government was focusing on nature based solutions for ecosystem restoration to benefit people and the planet. He revealed that last week Pakistan has floated worth USD500 million green euro bonds. "The resources generated through these bonds will be used to provide green energy. Similarly, Pakistan has set up Ecosystem Restoration Fund which will create 200,000 green jobs," he added.
Malik Amin Aslam said Pakistan was going to start dialogues with some bilateral lenders for debt for nature swap, adding that Pakistan would be the first country to go for this financial instrument for their nature performance.
Finance Minister Punjab Makhdoom Hashim Jawan Bakht said their contribution to the world air pollution is negligible but they are in the top five most affected countries due to climate change. He said that PTI has converted 150 million hectares into green lands and aimed to move to 30% green energy. He said aquifer in Lahore is depleting and to refill it is important to create lake around Lahore. He also said Lahore would be the first city to monetize water.
He said green financing is growing faster as within next two years it wove cover the market of 2 trillion. "In Lahore, smog was a major concern. We, by declaring smog as a disaster, put restriction on brick kilns and shifted it to zig-zag technology," he said.
The minister revealed that the Punjab Environment Endowment Fund has been established and five billion rupees would be allocated for it in the budget. The minister said green financing is going to be a good market that they have been tapping the opportunity
Provincial Minister for Environment Muhammad Rizwan talked the Punjab government's initiatives to reduce carbon emissions. He also said there was an idea to introduce air purifiers in classrooms but unfortunately, they couldn't work on it due to lockdown. He said that over next ten years of the UN Decade for restoration of ecosystem, Pakistan would keep playing its role.
In his opening remarks, SDPI Executive Director Dr. Abid Q. Suleri said Pakistan despite being one of the least polluter countries have been facing the brunt of climate change. This is duty of polluters to pay for ecosystem restoration; Pakistan calls for green climate fund and thinking of initiating debt swap for nature performance, he said.
Mr. Suleri further said that Pakistan would be working with countries and the United Nations to initiate nature performance bonds as our performance to protect nature is visible now in terms of 10 billion tree tsunami. He said
Vice Chancellor Prof. Dr. Asghar Zaidi appreciated that leading policymakers, organisations, environmentalists and figures in the financial community were calling for actions and initiatives that integrate nature, climate and other sustainable development goals (SDGs) into the response to the debt crisis, by funding short-term recovery needs whilst kick-starting a virtuous circle to rapidly scale up international nature and climate finance. He elaborated the three strategy adopted by GCU which comprise of Sermons, Surveillance and Science. .
He called upon youth to be the flag bearer of this green movement to make Pakistan greener and prosperous He said acknowledging the government's efforts, the United Nation has chosen Pakistan to host the World Environment Day.
LCWU VC Prof. Dr. Bushra Mirza said only with healthy ecosystems they could enhance people's livelihoods, counter climate change and stop the collapse of biodiversity.
GCU SDSC Director Prof. Dr. Faiza Sharif, LCWU Environmental Sciences Department Chairperson Prof. Arifa Tahir, and SDPI Research Fellow Dr. Shafqat Munir and Director Advocacy & Campaigns Moazzam Sharif Bhatti also addressed the seminar, and called for the use of technology and public private partnerships to work to restore the ecosystem.
Public service messages about climate change made by the students of different universities were also broadcasted at th