About our University
About Us

Government College Lahore or simply GCU, is synonymous with Lahore. Among the most famous of Lahore colleges, it is among the first educational institutions that were established in the Punjab. Generations of students have passed through its portals and attained eminent positions in all walks of life in Pakistan. 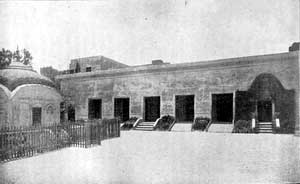 Although the establishment of a Central College at Lahore was sanctioned in 1856 with the condition that the teachers should be graduates of Oxford, Cambridge, Dublin or Durham, it was not until January 1, 1864 that the college opened its doors in the palace (haveli) of Dhian Singh/Khushal Singh, in Lahore's Walled City.

In April 1871 the college moved to a large Bungalow near Anarkali. In 1873 its location was changed to another house called Rahim Khans Kothi. It was in 1876 that the college moved into the present building. The construction had started almost in mid 1872 and was completed in 1877. Situated in the heart of the city, the site is surrounded by main business and administrative areas, schools, colleges and Punjab University old Campus. Presently raised to the status of university, Government College University (GCU) site is located at the junction of the Mall and the Lower Mall and occupies a focal point.

The first principal was the famous Dr. G. W. Leitner whose name is closely attached to the College. In April 1871 the college moved to a large Bungalow near Anarkali. In 1873 its location was changed to another house called Rahim Khan’s Kothi.

When it was decided to move to more suitable premises, a site on an eminence north of the Soldier's Garden (Gol Bagh) was selected, and a 'picturesque building', with a large central clock tower was constructed. That Gothic was the chosen style for the building is not surprising. Among the first major structures of Lahore, the missionary zeal frequently expressed by the Lawrence brothers (Henry and John Lawrence) no doubt had an impact on the architectural expression of the college. 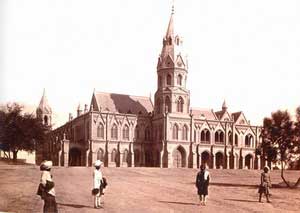 The building was designed by W. Purdon, Superintendent Engineer, and constructed under the supervision of Executive Engineer Kannhaiya Lal. It was completed in 1877 at a cost of Rs. 320,000. A couple of years after its completion. Viceroy Lord Lytton presided over the convocation of 'Punjab University College' (1879) held in its convocation hall with its enormous height—"the great hall of the Lahore College, which was tastefully decorated and arranged for the occasion." Lytton papers recorded that the event was witnessed by "a large number of ladies and gentlemen, European and Native."

From the main road the main college building is seen above the landscaped terracing through the foliage of trees, presenting a picture postcard view. The Lahori brick is combined with sparing use of black Chiniot stone in the first floor columns as well as in the borders lining the openings. Pointed arches on the facade are accented with simple moldings, and the building is topped by a steeply sloping roof. According to Kannahiya Lal, the slate for the roof covering was acquired from Dalhousie Mountain hundreds of miles away.

The centre of the GCU main building is marked with an enormous entrance tower—a most impressive element representing the image of Government College. Placed on a 15' high podium, and accessible from the garden by a wide flight of stairs, the tower rises to a total height of 176'. Divided into four distinct storey, it is terminated in the form of a spire. The battered sides of the octagonal tower carry quaint dormer windows, with its enormous clocks visible from great distances. The classrooms are accessed from a deep verandah which also provides protection from the strong Punjab sun. 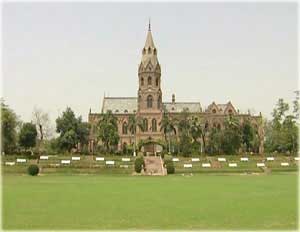 The academic campus of any educational institute plays an important part in the upbringing of its students. It imparts a sense of belonging and pride to them. Built during the colonial era, the architectural style, known to be the celestial gothic, best suited the academic building. Government College University (GCU) Lahore is considered to be one of the most majestic and gorgeous buildings in the sub-continent. Reflecting the neo gothic tradition, the building imparts the grandeur and mannerism that adapts the climatic and environmental requirements in the form of its wide verandahs and high ceilings. Further scale and grandeur is added to the building by placing it on the highest level of its contoured site. Sprawling lawns combined with an intricate landscape are the integral parts of GCU's overall perception. Not only did the architect design a majestic building but also complemented this grandeur with the openness of its grand lawn, the legendary "Oval Ground" of the University Campus. Oval Ground is the place where Ravians sit, relax, talk, study, discuss, analyze, ponder, and even muse and meditate. Here they make new contacts and explore new ways to manifest their liking for the unknown. The Oval offers them with opportunities to display the dynamic talents they possess.

The most prominent part of the building is the Main Hall (now called Dr. Abdus Salam Hall). It Consists of a central nave and aisles running along the 4 sides. The nave has double height. The 4 aisles are double storeyed and they form a gallery on the upper floor. The main entrance to the hall is through a porch on the West side. Another entrance on the South faces the Oval ground. This is an arched opening with grand and traditionally carved wooden door. After entering through this magical opening, a passage leads into the hail. Inside the hall, where the aisles cross each other at corners, big rooms have been provided. The hail is a wonderful example of composed mannerism that depicts harmony, symmetry and balance. The main conical-type clock tower at the facade is square at the base. The first two storeys are square and a squinch arch is placed to convert the square plan into octagon. The first two storyes are followed by two storeys of octagonal plan with arched openings and triangular projections.

Next to Bokhari Auditorium is the New Post-Graduate Block. This block was constructed to meet the needs of the increasing number of students. The foundation stone was laid in 1993 and the building was completed in June 1999. This building has 4 floors and includes a basement that houses the postgraduate library.

New Chemistry Block and New Science Block are among the later additions. Both these buildings are situated to the East of the main building. New Chemistry Block is a true extension of GCU's main building. Gothic features and detailing have been incorporated in its exterior. The building rises upto 2 floors only. Buttresses and four centered pointed arches are used to increase the verticality of the building. Detailed brickwork and ornamentation is similar to that of the main building that has always been the original source of inspiration.

The New Science Block is a much earlier addition than the New Chemistry Block and was constructed mainly for utility purpose. Apart from the brick facing the only element taken from the main building is the use of gothic arches in the verandahs.