A panel discussion on “Student Centric Approach to Higher Education” was held here at the Government College University Lahore where speakers stressed that students need to empowered in universities affairs through a vibrant system of clubs and societies and their due participation in governing bodies i.e. academic councils, finance and planning committees, syndicates and the Senates.
The panel discussion is part of week-long first All Pakistan Summit for the Students’ Societies being hosted by the GCU in collaboration with the UNESCO Creative Cities Network: Lahore-City of Literature through Commissioner Lahore, Superior University and NGOs Bargad Organization for Youth Development and Shaoor Foundation for Education and Awareness.
Students from 30 universities across Pakistan are participating in the summit.
Prof. Dr. Mohammad Nizamuddin, the former chairperson of Punjab Higher Education Commission, chaired the panel discussion moderated by Vice Chancellor Prof. Dr. Asghar Zaidi. Pakistan Science Foundation Ex-Chairman Prof. Dr. Muhammad Ashraf and University of Baltistan, Skardu Vice Chancellor Dr. Muhammad Naeem Khan were also among the panelists.
Students representatives, Naima Kazmi, the President of Kashmir and Palestine Societies, and Maimoona Imtiaz, the President of Anti-Narcotics Society, also participated in the panel discussion.
In her address, Bargad Executive Director Sabiha Shaheen said that the student societies and clubs system could not succeed until it is separated from the university administration. “In most of the educational institutions, students’ societies are formed but practically they are run by the staff and teachers, not students,” she said.
Sabiha Shaheen also stressed on effective female participation and financial autonomy of student societies, saying that they should have their own budgets, offices and student executive bodies who manage and run these societies.
Prof. Dr. Naeem Khan said that universities and colleges should be governed by students and decisions regarding them should be taken in consultation with them. He said that students should have due representation of all governing bodies of all universities and colleges.
Vice Chancellor Prof. Asghar Zaidi said when students step into professional lives they face many challenges but universities need to help them person for these challenges. He believed that students need to empowered in universities affairs through a vibrant system of clubs and societies; and GCU is a role model in this regard where this system exists for more than a century. He said GCU spends about Rs. 17 million annually on its students’ societies, and they play pivotal role in inculcating leadership qualities in students.
Prof. Muhammad Nizamuddin said that the scope of student societies needs to be widened. “Universities societies should not be limited to music, drama and debates only. Harvard University's curriculum changes every four years, but the tradition of student leadership grows stronger each year,” he said.
Columnist Salman Abid believed that societies are the best available alternative to student unions but according their survey they are dormant in all educational institutions except few. “Clubs and societies exist but leadership and environment needed to run these societies is missing,” he said. Abid demanded that the participation of students in societies clubs should be made a part of their credit hours.
Raja Shoaib Akbar of Shoor Foundation spoke about creating an environment in universities in which student leadership flourishes.
Later, two more panel discussions on topics of “Students Leadership, Campus Representation and the Question of Students' Unions/Societies” and “Psycho-social toxicity, drug addiction and the strategies to eradicate this menace” were also held at GCU on second day of week-long summit that also includes debates, contests, theatrical festivals, essay and poetry writing competitions, painting exhibitions and music concerts. 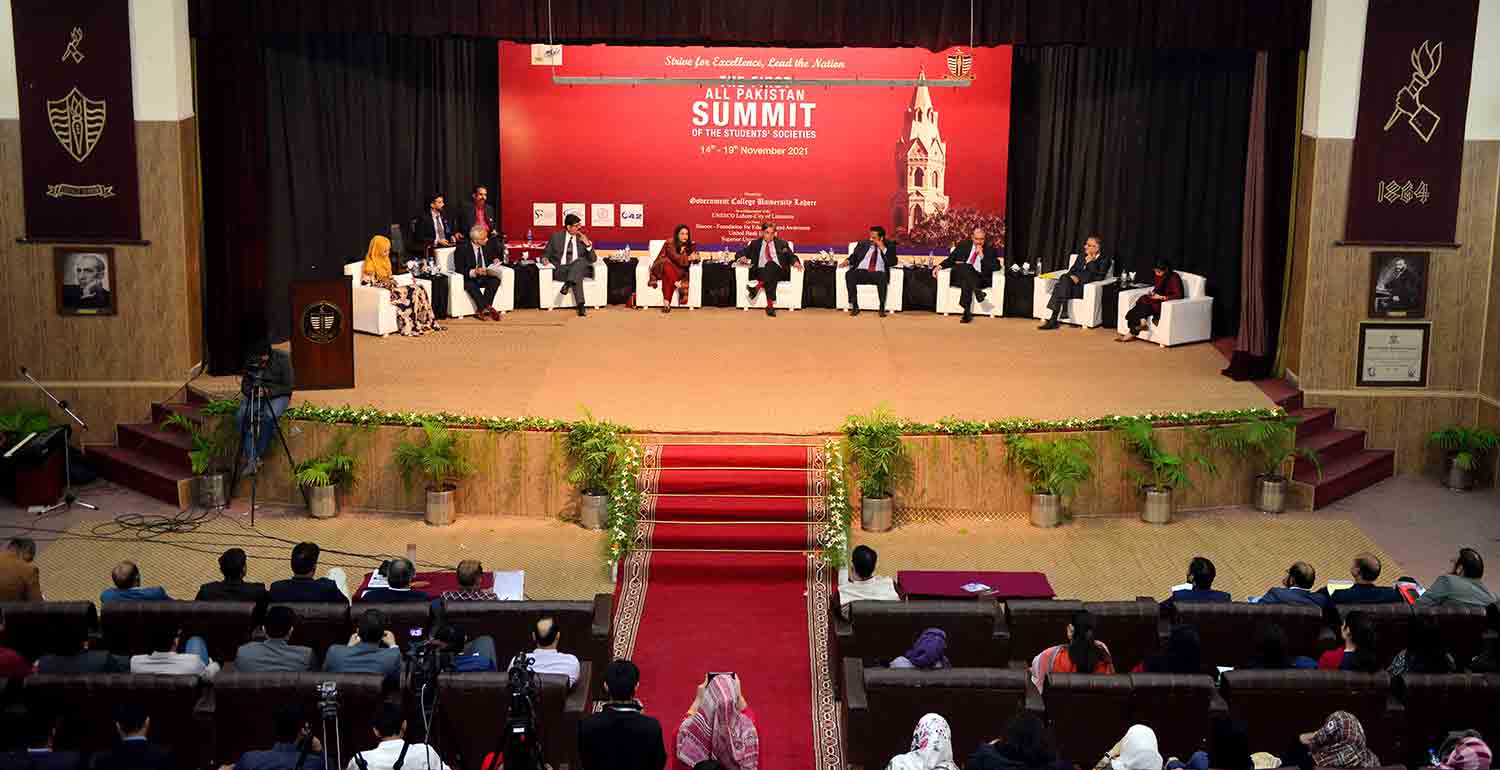