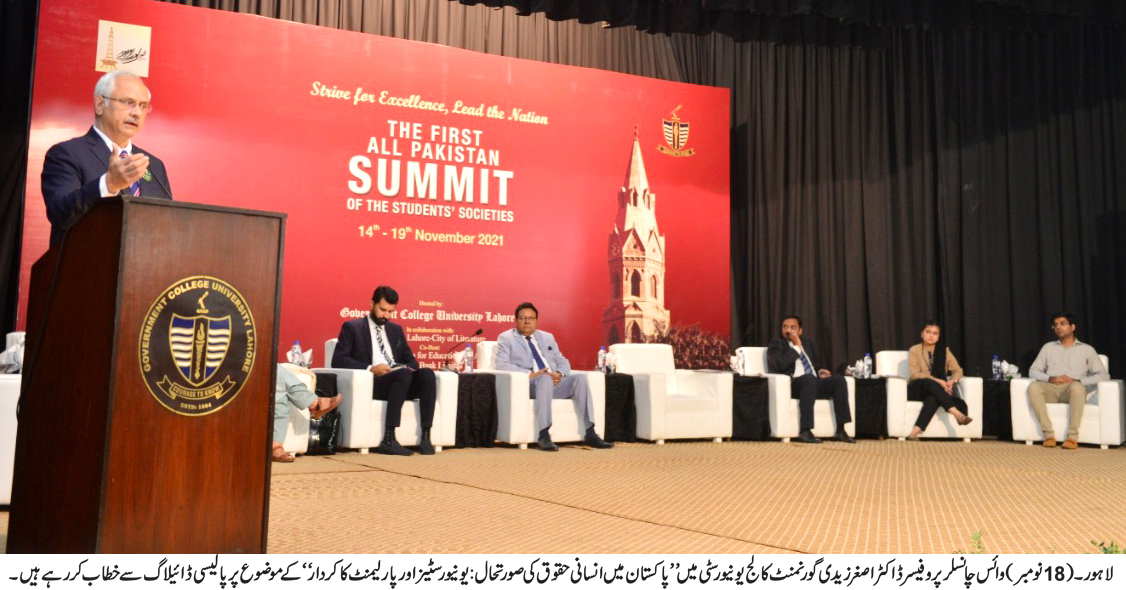 A policy dialogue on “Status of Human Rights in Pakistan: Role of Academia and Parliament’ was held here on Thursday at the Government College University Lahore.
Punjab Minister for Human Rights and Minority Affairs Ijaz Alam Augustine chaired the policy dailouges which was also addressed by GCU Vice Chancellor Prof. Asghar Zaidi, LUMS Vice Chancellor Prof. Dr Arshad Ahmad and Member Punjab Assembly Ms. Umul Banin Ali.
The dialogue was part of week-long first All Pakistan Summit for the Students’ Societies being hosted by GCU.
In his opening address, Vice Chancellor Prof. Zaidi it is responsibility of universities to at least give academic solutions to societal problems, but they could only make this contribution well if they hold dialogues, discussions and research on such crucial matters. He said this GCU summit of public and private universities was aimed at opening debates and discussions about the societal issues with the future leadership i.e. students.
Minister Ijaz Alam Augustine said human rights is such a big canvas that you can work anywhere on it and make things better. He briefed students about a policy, they have made, for human rights. He said that they established human rights cells at district levels, so if any incident occurs in Rajan Pur, it would reach them, and make it easier from them to act.
Journalist Salman Abid said the now world monitors us through various social media platforms; making law is not enough not until it is practically implemented. He believed all big institutions especially Police need to be rebuilt to remove all sorts of biases and discriminations. He also laid stress to bridge gap between the Parliamentarians and the youth of Pakistan.
LUMS VC Dr Arshad Ahmad said freedom for expression or academic freedom is the last refuge in the society where we are able to express our fears, our thoughts, our sense of justice, equity and our sense of right and wrong. He stressed on students’ participation in all governing bodies of universities from cafeteria committee to disciplinary committee.
Rights Activist Prof. Dr Farkhanda Aurangzeb said there are conventions as well as discriminations against women, adding that we have rights for children and lots of abuses against them as well.
“When we talk about fundamental rights, the first and foremost priority we have is education and we have 2.6 million children out of school which definitely speaks volumes,” she said.
She concluded that the present status of human rights tell us that we lack in mechanism of implementations.
MPA Ms. Umul Banin Ali also shed light on violations of human rights in the society, saying giving admissions to few high merit students in best schools and universities and denying other is also violation of human rights.