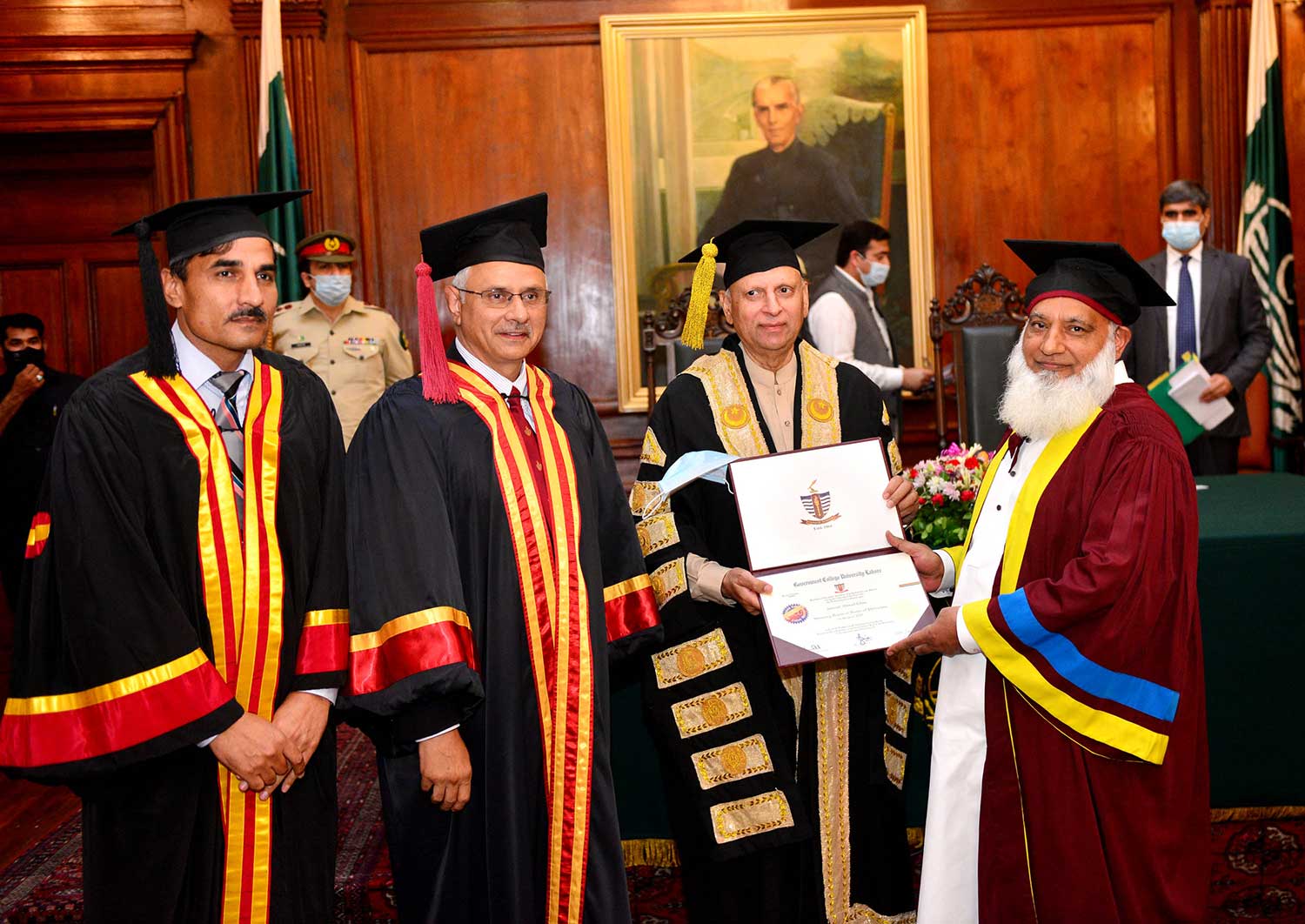 The Government College University Lahore on Wednesday conferred the honorary doctorate of philosophy (PhD) degree upon eminent philanthropist, dedicated social worker and compassionate humanitarian Mr. Anwaar Ahmad Khan for his thirty years meritorious services to the society.
Punjab Governor Chaudhry Muhammad Sarwar chaired the special degree awarding ceremony at the Governor’s House Lahore where he along with Vice Chancellor Prof. Dr. Asghar Zaidi awarded the Honoris Causa Degree of Doctor of Philosophy to Mr. Anwaar A. Khan.
The citation presented by Registrar Dr. Shaukhat Ali highlighted the commendable services of Mr. Khan as a well-known philanthropist, who has worked tirelessly for the uplift of the down-trodden over three decades.
Speaking on the occasion, Chaudhry Sarwar said Mr. Anwar Khan spends his energies, time and millions of rupees every year serving food to poor families, providing funds for marriages of daughters of laborer class, provision of financial assistance to widows and orphans, operating free health facilities and first aid points and provision of clean drinking water nationwide.
He also said that Mr. Anwaar A. Khan also did exemplary social work for people affected by COVID-19, and this honorary degree would be a token of recognition to his great services to the society.
Mr. Khan is also member Board of Directors of 600-bed hospital which provides indoor and outdoor free medical treatment to over one million individuals annually. He is General Secretary of Jamiat Taleem ul Quran Trust which is providing basic and Islamic education to 80,000 students in over 2000 maktabs and 69 jails.
Addressing the ceremony, Vice Chancellor Prof. Asghar Zaidi said GCU has groomed several generations of great human beings who made their mark in different walks of life. “In order to seek inspiration from those who make invaluable contribution to the welfare of the society, we acknowledge the services of such social leaders in several ways,” he said.
The Vice Chancellor believed that this GCU initiative, for sure, shall serve as an inspiration for the privileged to emulate the worthwhile example of the Mr. Anwaar Khan and share their abundant resources with the underprivileged of our society.
Prof. Dr. Zaidi emphasized the fact that the GCU is breaking away from a tradition of granting honorary degree to eminent foreign dignitaries and politicians only, and this year it is acknowledging a person who has been doing good to the society and country.
He said that people like Mr. Anwaar A. Khan are role models for our youth, especially to our students in placing value to philanthropy and social work.
dingdong togel